If you do not know what to do to increase your energy level, read the following lines:

A pendant that gives you the feeling -when performing a kinesiology test- to be as strong as a martial art master is quite amazing. But if you keep wearing it 24 hours a day because your body needs it and wants it, then this object is surely worth it! 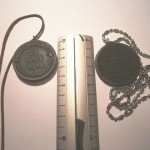 The effects of the pendant

According to its maker Ismael Aviso, this pendant has great properties:

–          Protects the body from electromagnetic radiations;

Ismael Aviso asked me to stand up, feet together, arms along my body with one hand perpendicular to my arm. Then he tried throwing me off balance by pushing very hard on my hand. I spent a lot of energy trying to resist and lost eventually my balance. Then I put on the pendant and we started this test again. Big surprise for me this time: I felt like I spent very little energy compared to the first time and I hardly moved one millimeter despite the desperate efforts of the inventor. Frankly, I just felt I was as strong as a martial art master !

Description and how it works

This pendant is made from natural minerals including volcanic lava that are fused and bonded at a molecular level. This new structure radiates a so called “scalar” energy that enhances the physical body’s biofield. Contrary to the other scalar energy pendants you can find in the market today, this one is finely balanced and gives more than just negative ions from lava. Indeed, the F.I.R. (Far Infra Red) cloth glued on the pendant radiates thermal energy that has a positive impact on the body. To cap it all, a small intensity magnet inside the pendant provides another type of beneficial energy.

Who is the maker of this pendant?

Ismael Aviso is a Philippine inventor who is a satellite telecommunication engineer. He is mostly known for his autonomous electric car that works with a special type of electric generator. This generator extracts the “energy of the vacuum” that quantum mechanics has discovered at the beginning of the twentieth century. In order to improve his health, Ismael Aviso utilized his creativity in the field of human energetics. His first contribution was the invention of a machine that energizes mineral water. His latest invention commercialized in 2008 is the energetic pendant. His web site: avisowater.com

–          Drink enough water to eliminate toxins in particular when you start using the pendant;

–          The pendant should usually be recharged every two years by leaving it under solar rays for about 4 hours.

SPECIAL OFFER:
For those of you who would be interested to discover energy-giving holograms, you will have the opportunity to get one with your pendant for a very reasonable price! Go there

All the information provided herein is only indicative. Even though the described benefits of this pendant are real, no statistical study has been conducted. It is therefore impossible to prove any systematic therapeutic effect.  In other words, wearing this pendant should not replace any medical treatment.

Get your energetic pendant today !